New York, January 9, 2012 - Curtis, Mallet-Prevost, Colt & Mosle LLP has announced that Remy Lerner has been promoted to partner and Gregoire Andrieux to counsel in its London affiliate. Both are based in the firm's Paris office.

'Remy and Gregoire's promotions reflect the growing strength of Curtis' Corporate practice in Paris,' said George Kahale III, chairman of Curtis. 'We are proud of their accomplishments on behalf of the firm and its clients and look forward to their contributing even more to the growth of our Corporate practice internationally, especially in Europe.'

Remy Lerner is a member of the firm's Corporate group. He focuses his practice on French and cross-border transactions primarily in the energy, telecommunications, aviation, hotel and industrial sectors in Europe, North America, and West and Central Africa. Mr. Lerner is also active in Curtis' investment management practice, advising European investment funds on obtaining regulatory approval to market their products in France. He advises international clients on a wide range of corporate matters primarily in the areas of mergers and acquisitions, corporate and project structuring, as well as on their day-to-day corporate operations.

Gregoire Andrieux is also a part of Curtis' Corporate department. His practice focuses on domestic and international M&A transactions, particularly leveraged buyouts and other private equity transactions. Mr. Andrieux advises private equity funds, founders and/or managers in their acquisition, fund raising or disposal transactions. He also has experience in debt restructurings and corporate reorganizations. He conducts lectures in contracts and torts at the University of Paris Dauphine.

Curtis, Mallet-Prevost, Colt & Mosle LLP is a leading international law firm providing a broad range of services to clients around the world. Curtis has offices in the United States, Europe, Central Asia, the Middle East and Latin America. The firm's international orientation has been a hallmark of its practice for nearly two centuries. For more information about Curtis, please visit www.curtis.com or follow Curtis on Twitter (twitter.com/curtislawfirm) and Facebook.com/Curtis.Careers). 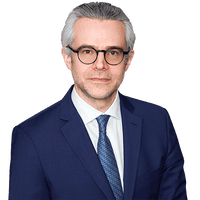