This news has been featured in Law360

Washington, D.C., January 11, 2021— Curtis is pleased to welcome veteran Africa-focused attorney Kalidou Gadio to its Washington D.C. office. Having spent over three decades counselling African governments and financial institutions throughout the entire continent, Mr. Gadio has close ties with several key economic development initiatives in the region and has been credited with developing regional financing establishments. In his prolific career, he has served 28 years at the African Development Bank including eight years as its general counsel , played a critical role in instituting the Africa 50 Infrastructure Fund and the African Legal Support Facility, and spearheaded the implementation of the treaty on Anti-Corrupt practices in project procurement.

Mr. Gadio brings unparalleled insight into legislative reforms, institutional capacity building, project finance, infrastructure development, and public-private partnerships in 54 African countries. He has been involved with strategic economic development projects involving energy, natural resources and infrastructure. His advice extends to both sovereign state governments and private enterprises and corporations, and he frequently advises either side on disputes and negotiations involving foreign investments.

Mr. Gadio’s practice also has an emphasis on the MENA region, with a focus on project finance transactions including Islamic finance, Sukuks and bonds, international arbitrations, energy and equity investments.

Curtis Chairman George Kahale III said, “Kalidou Gadio’s expertise is internationally recognized. He joins a Middle East and Africa-focused practice group that is already widely recognized for its depth and breadth, placing the group among the world leaders in this area of practice.”

Mr. Gadio commented, “I am honored to join Curtis, a firm with a strong global reputation and talented network of international attorneys. I hope to celebrate many successes at the firm and enjoy a rewarding partnership, contributing my understanding of the culture and the legislative processes throughout the Africa and MENA region.”

Mr. Gadio has a Master of Laws (LL.M.) degree from Harvard Law School and a Diploma of Advanced Studies in Law from Sorbonne, University of Paris II. He has practiced law at international firms in Paris and New York. A native of Mauritania, he is fluent in English, French, Fulani and also speaks Arabic with moderate fluency. 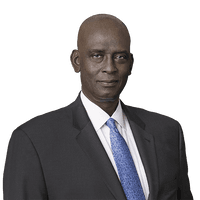