Geneva, July 5, 2022 – Curtis is pleased to announce the arrival of international arbitration partner Sebastiano Nessi, who will be based in Geneva. Swiss-qualified and with deep knowledge and experience of the Swiss, EU and Eastern European markets, Mr. Nessi enhances the firm’s offering to clients internationally and is a strong addition to Curtis’ market-leading disputes practice.

Mr. Nessi has been ranked among the 10 Most Highly Regarded Future Leaders in EMEA by Who’s Who Legal Arbitration since 2020, which notes that he is “a blazing talent” and “probably the best arbitration counsel of the young generation.” He is also recognized as a National Leader by Legal 500: Switzerland for Arbitration and Who’s Who Legal Switzerland Arbitration, which praises him for being “a star advocate.” Mr. Nessi has also been listed as a Rising Star by Euromoney Legal Media Group Expert Guides since 2019, and was awarded the 2021 Rising Star Award (EMEA) in Commercial Arbitration delivered by the International Financial Law Review.

Mr. Nessi has written and spoken widely on arbitration, and has taught commercial and investment arbitration as well as international dispute resolution at the University of Paris I, Panthéon-Sorbonne and Sciences Po Law School. He is also a lecturer at the Swiss Arbitration Academy. Being himself a Fellow of the Chartered Institute of Arbitrators (FCIArb), Mr. Nessi served as the Vice-chair of the Chartered Institute of Arbitrators' Young Members Group (CIArb YMG) and ICC YAF Representative for Europe and Russia (2019-2021).

Mr. Nessi has represented states and commercial clients in a variety of domestic and international disputes, including both commercial and investment treaty arbitrations, as well as enforcement and setting-aside proceedings before the Swiss Supreme Court. His experience spans disputes in the energy, oil and gas, commodities, pharmaceuticals, banking, M&A, automotive, real estate, maritime, engineering and construction sectors, complementing Curtis’ traditional areas of strength. His expertise also extends to aerospace and sports arbitrations, and he frequently sits as an arbitrator in commercial cases (Chairperson, Sole Arbitrator or Party-appointed arbitrator).

Curtis Chairman and International Arbitration Chair George Kahale commented, “We’re delighted that Sebastiano will be joining us in Geneva. He is a great addition not only for Geneva but also as part of our disputes team worldwide.” 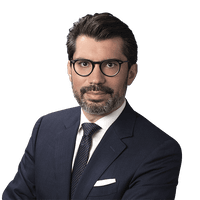